The business social compliance initiative (bsci) monitoring system is the european approach to improving social performance in supplier countries through a uniform social standards monitoring solution.
The BSCI is based on the labor standards of the International Labour Organization (ILO) and other important international regulations like the UN Charta for Human Rights, as well as on national regulations. This initiative aims at continuously improving the social performance of suppliers, ultimately enhancing working conditions in factories worldwide.
STEPS TO JOIN THE BSCI INITIATIVE:
WHAT KIND OF SUPPORT IS PROVIDED? To implement the BSCI Code of Conduct in the supply chain, BSCI has developed standardised management tools and guidance documents available on its website in various languages. Learn more here The BSCI has also developed adapted training activities to increase suppliers’ knowledge and skills with regard to social compliance. These training sessions are open for the suppliers of all BSCI Participants and include awareness raising and more advanced workshops.
HOW MUCH DOES IT COST? Certification costs: BSCI does not prescribe the cost of the audit but the minimum days an audit needs to be properly conducted. The final price varies from country, sector, level of industrialization etc. 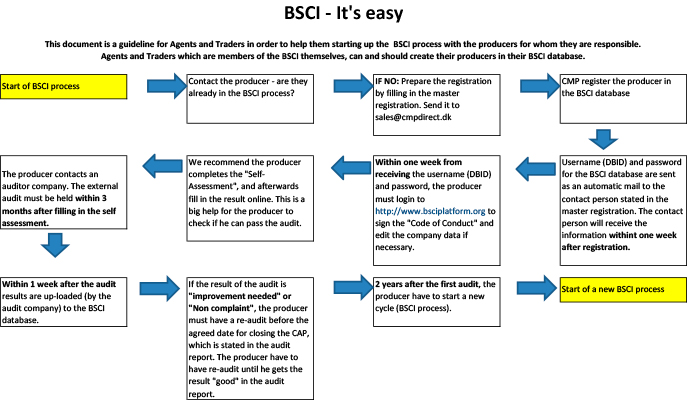